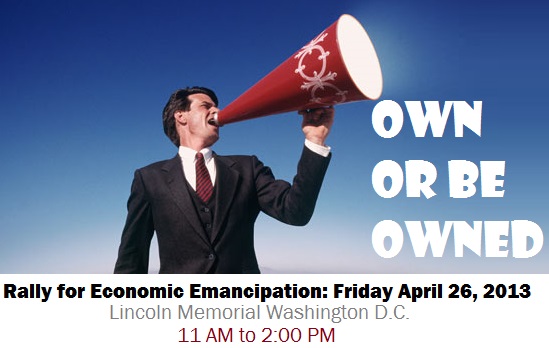 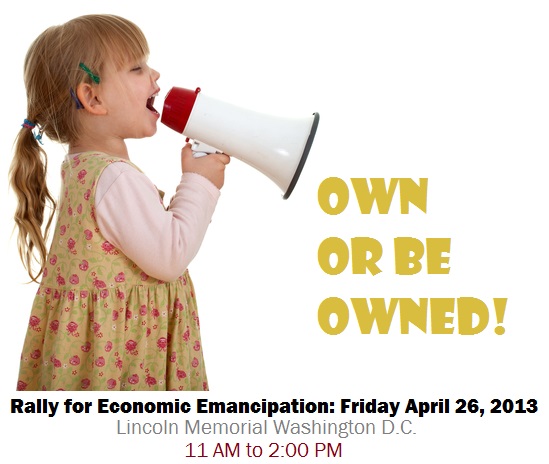 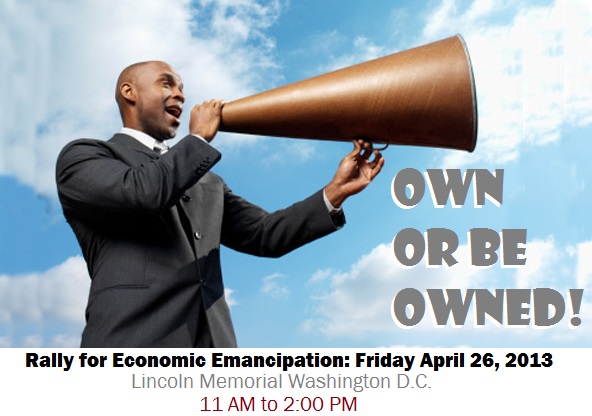 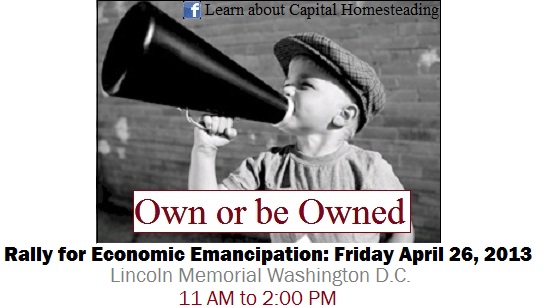 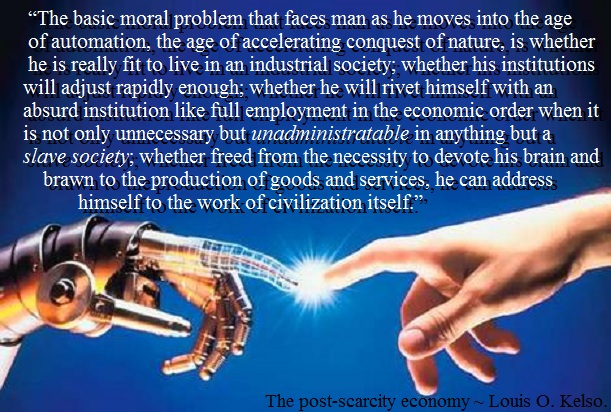 Economic Emancipation: Own or be Owned

Economic Emancipation: Own or be Owned

Liberating Every Citizen from the Slavery of Past Savings… Ownership: A Piece of the Action

"Conventional wisdom says there is only one way to earn a living, and that's to work. Conventional wisdom effectively treats capital (land, structures, machines, and the like) as though it were a kind of holy water that, sprinkled on or about labor, makes it more productive. Thus, if you have a thousand people working in a factory and you increase the design and power of the machinery so that one hundred men can now do what a thousand did before, conventional wisdom says,…

Though the conspicuous absence of such Constitutional specification of individual economic rights is glaring – especially within the context of an ostensibly “free market” economic environment and theoretical orthodoxy which formally asserts that maximizing systemic efficiency actually hinges on minimizing or eliminating competitive barriers to entry to achieve universal participation - in more recent times, inklings have…

With the 1848 publication of The Communist Manifesto, in what may be among the most renowned (or notorious, depending on your econo-political persuasions) opening lines in all of social and economic literature, Karl Marx and Friedrich Engels proclaimed to the world that there was a specter haunting…

We are living through a political crisis of the Transfer State: the United States has reached social and political limits beyond which it has become very difficult to squeeze the wage earnings of the working population for the benefit of those who do not earn wages.  The signs and symptoms of this crisis are essentially everywhere: in the drive to cut the federal budget, in welfare reform, in the continuing debate over health care, in recurring drives to…

"Such access to the ownership of capital cannot be brought about by taking from some who have too much and giving to others who have too little or none, for this would be an attempt to maintain the integrity of private property in capital by means which would destroy it. But it would seem worth considering whether a system of financing new capital formation can be devised which would simultaneously promote the growth of new capital formation and increase the number of households owning…

There are two factors driving this post.  First is an overwhelming need for CESJ to get above the  noise, the sturm and drang of political rhetoric and become a serious issue before the polis!  There is no escaping the crushing logic of Binary Economics, or Capital Homesteading, The ESOP and the whole failed theory of Keynsian Economics.  Why then are we unable to move our message forward.  The undaunted courage and tenacity of Dr.…

I am a member of the Coalition for Capital Homesteading (a proposal consistent with binary economics), and I have found very little substantive argument against the plan. I was pleased to find a critical article in a Mises Institute newsletter archive, and I have prepared responses here to the points it contains. The article can be found at:…

What Capital Homesteading Would Mean for Small Business

The Promise of Participation: Own or be Owned

"There is one thing stronger than all the armies in the world and that is an idea whose time has come." - Victor Hugo

Capital Homesteading is just such an idea.

But first the Challenge!

"The society had fallen, much as our society has today, into a tangle wherein the bulk of men were disappointed and angry…